What’s in a cigarette?

There are four main components to a cigarette: the filter, additives, tobacco, and the paper.

During the 1950s, tobacco companies introduced filtered cigarettes. The idea was that the tiny holes in the filter would allow the toxic smoke to mix with air to make it easier on the throat, and also allow some of the smoke to escape before inhalation.

However, we know that filters do nothing to improve the safety of tobacco smoking. This is because:

Despite this, many people still believe the myth that filters have a protective function.

Another problem with filters is that they are made of plastic, which is detrimental to the environment. Cigarettes are the most littered item in Australia, and discarded cigarettes can harm wildlife both on land and in our waterways.

No, tobacco is not natural. Both loose tobacco (for rollies) and tobacco in cigarettes contain additives which are used to mask the harsh taste of tobacco.  Ingredients such as sugar, honey, cocoa and peppermint are added to the tobacco, paper and filter to improve the experience of smoking.

Additives are also used to increase the addictiveness of cigarettes, making it harder to quit. Some additives even become carcinogenic (cancer-causing) when burned. Other additives relax the airways, exposing the body to more nicotine and higher levels of tar.

In 2017, tobacco companies in the USA were ordered by a Federal Court to advertise truthful statements to the public about how they designed cigarettes to make them more addictive.

Here’s an example of one of their statements: 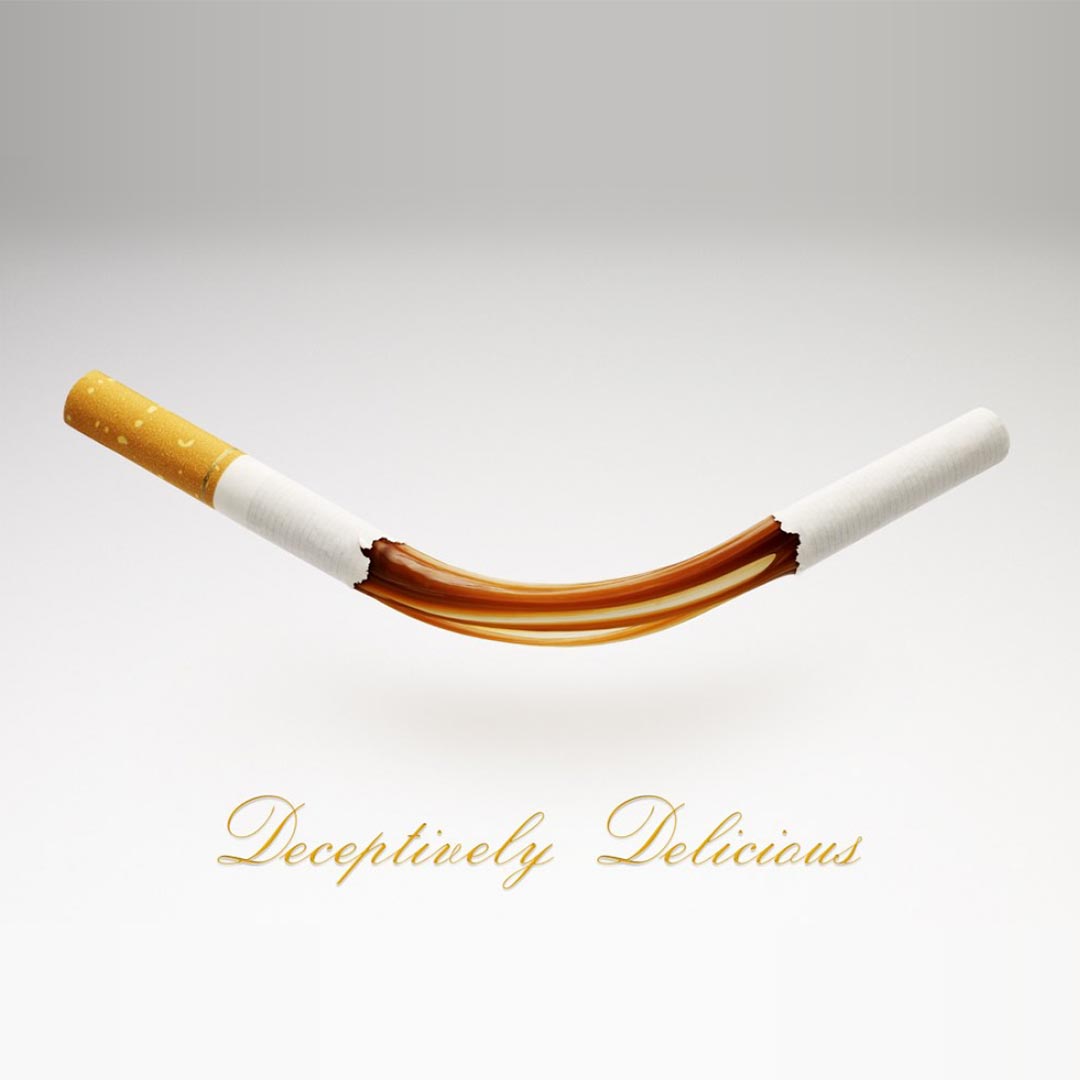 "Cigarette companies control the impact and delivery of nicotine in many ways, including designing filters and selecting cigarette paper to maximize the ingestion of nicotine, adding ammonia to make the cigarette taste less harsh, and controlling the physical and chemical make-up of the tobacco blend."

In other words, cigarette companies have now publicly admitted to using filters, additives and other tactics to make cigarettes easier to smoke and to get as much nicotine into smokers’ bodies as possible.

You will not find a list of additives on your packet of cigarettes. However, three major tobacco companies have volunteered some information to the Australian Government Department of Health which is available to download. Here you can read a list of some of the ingredients added to the tobacco and other components of cigarettes such as the paper and filters.

Here are some examples of additives in your cigarettes from the industry-provided documents:

Many of these additives are regarded as safe for use in food and beverages; however, when added to cigarettes, the additives are burned and inhaled which can make them toxic. For example, carob bean extract produces benzene and formaldehyde when burned, which can cause cancer. Since these dangerous chemicals are produced in the burning process, they are not listed as ingredients.

Information on additives, tar, nicotine and carbon monoxide are not permitted to appear on cigarette packets. This is due to concerns that advertising claims such as ‘low tar’ can be used to make some cigarettes appear safer than others, but there is no such thing as a safe cigarette. 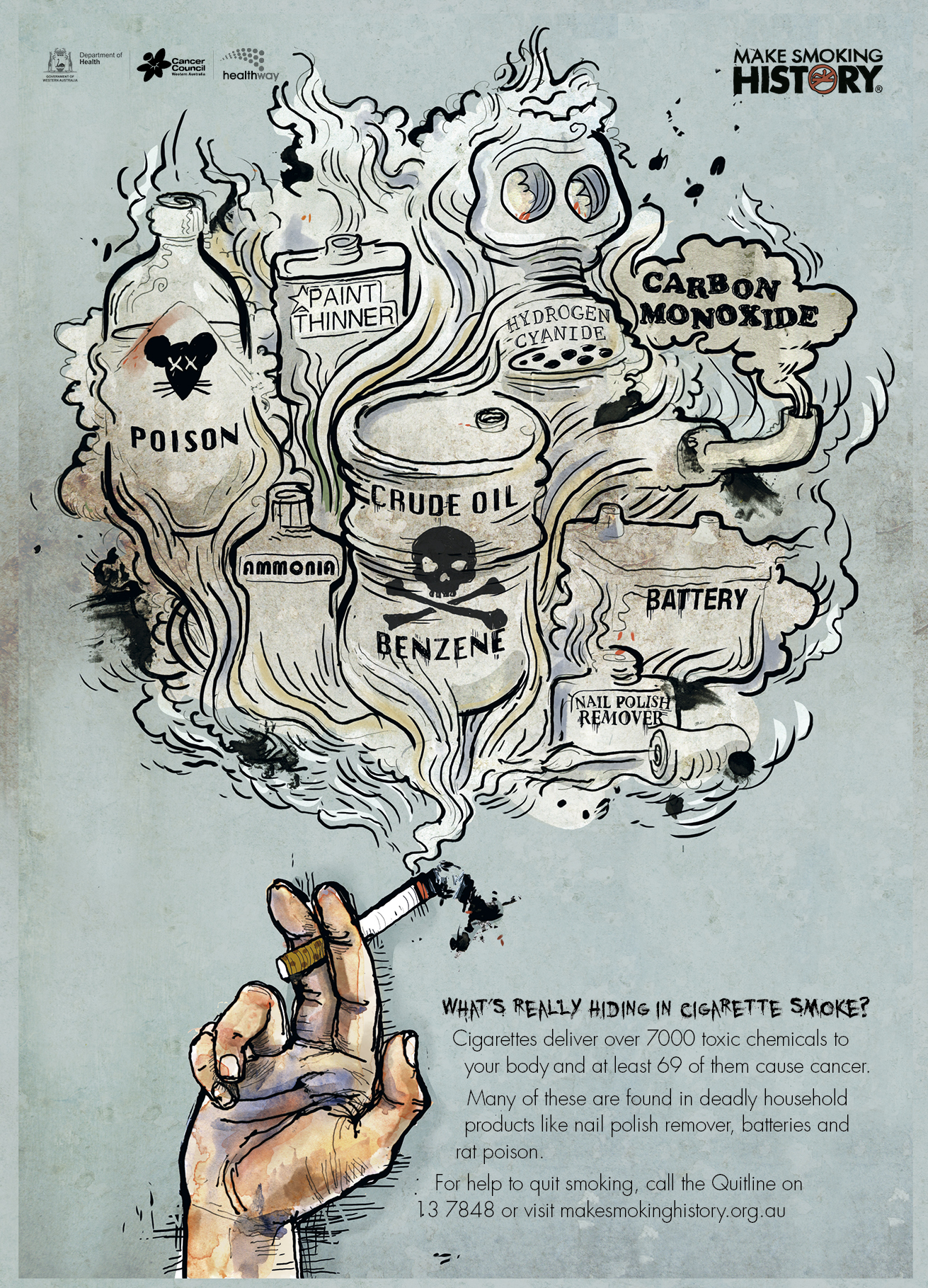 There are over 7000 chemicals in tobacco smoke, at least 69 of which can cause cancer. Whether you are smoking factory-made cigarettes, rollies or cigars, burning tobacco creates a toxic smoke that can harm almost every part of your body.